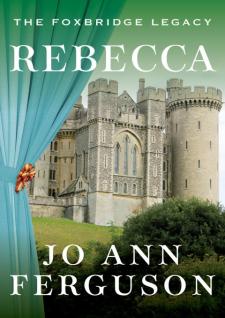 The British soldier whose life was saved by a young woman during the American Revolution returns to claim her as his bride in the second seductive novel in Jo Ann Ferguson’s captivating Foxbridge Legacy series About to exchange vows with her fiancé, Rebecca North is stunned when a towering, raven-haired stranger interrupts the ceremony. Five years earlier, at the height of the American Revolution, fourteen-year-old Rebecca rushed to the aid of a wounded English soldier she discovered hiding out in her barn. Although he was an enemy of the Patriots, she saved his life. When he begged her to fulfill his final wish before he rode off to battle, she made a secret vow. Now he has returned to claim his bride.   After swearing never to give her heart to Nicholas Wythe, Rebecca reluctantly leaves Connecticut for England. But at legendary Foxbridge Cloister, his sprawling estate on the wild north coast, the new Lady Foxbridge realizes there are those who resent the Yankee in their midst.   While a vengeful enemy plots to destroy her, Rebecca makes startling discoveries about her husband. As a relationship forged in the fires of war flames into something deeper, she will risk everything—even her life—for what she never expected to find with Nicholas: a passionate, lasting love. Rebecca is the 2nd book in the Foxbridge Legacy, but you may enjoy reading the series in any order.