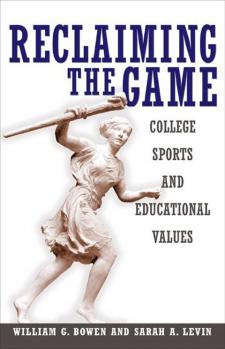 In Reclaiming the Game, William Bowen and Sarah Levin disentangle the admissions and academic experiences of recruited athletes, walk-on athletes, and other students. In a field overwhelmed by reliance on anecdotes, the factual findings are striking--and sobering. Anyone seriously concerned about higher education will find it hard to wish away the evidence that athletic recruitment is problematic even at those schools that do not offer athletic scholarships. Thanks to an expansion of the College and Beyond database that resulted in the highly influential studies The Shape of the River and The Game of Life, the authors are able to analyze in great detail the backgrounds, academic qualifications, and college outcomes of athletes and their classmates at thirty-three academically selective colleges and universities that do not offer athletic scholarships. They show that recruited athletes at these schools are as much as four times more likely to gain admission than are other applicants with similar academic credentials. The data also demonstrate that the typical recruit is substantially more likely to end up in the bottom third of the college class than is either the typical walk-on or the student who does not play college sports. Even more troubling is the dramatic evidence that recruited athletes "underperform:" they do even less well academically than predicted by their test scores and high school grades. Over the last four decades, the athletic-academic divide on elite campuses has widened substantially. This book examines the forces that have been driving this process and presents concrete proposals for reform. At its core, Reclaiming the Game is an argument for re-establishing athletics as a means of fulfilling--instead of undermining--the educational missions of our colleges and universities.