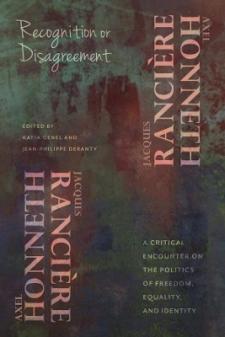 Axel Honneth is best known for his critique of modern society centered on a concept of recognition. Jacques Ranciere has advanced an influential theory of modern politics based on disagreement. Underpinning their thought is a concern for the logics of exclusion and domination that structure contemporary societies. In a rare dialogue, these two philosophers explore the affinities and tensions between their perspectives to provoke new ideas for social and political change. Honneth sees modern society as a field in which the logic of recognition provides individuals with increasing possibilities for freedom and is a constant catalyst for transformation. Ranciere sees the social as a policing order and the political as a force that must radically assert equality. Honneth claims Ranciere's conception of the political lies outside of actual historical societies and involves a problematic desire for egalitarianism. Ranciere argues that Honneth's theory of recognition relies on an overly substantial conception of identity and subjectivity.
While impassioned, their exchange seeks to advance critical theory's political project by reconciling the rift between German and French post-Marxist traditions and proposing new frameworks for justice.