Refusing to Kiss the Slipper 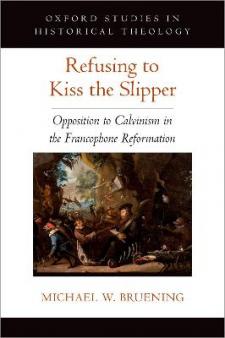 History has long viewed French Protestants as Calvinists. Refusing to Kiss the Slipper re-examines the Reformation in francophone Europe, presenting for the first time the perspective of John Calvin's evangelical enemies and revealing that the French Reformation was more complex and colorful than previously recognized. Michael Bruening brings together a cast of Calvin's opponents from various French-speaking territories to show that opposition to Calvinism
was stronger and better organized than has been recognized. He examines individual opponents, such as Pierre Caroli, Jerome Bolsec, Sebastian Castellio, Charles Du Moulin, and Jean Morely, but more importantly, he explores the anti-Calvinist networks that developed around such individuals.

Each group had its own origins and agenda, but all agreed that Calvin's claim to absolute religious authority too closely echoed the religious sovereignty of the pope. These oft-neglected opponents refused to offer such obeisance-to kiss the papal slipper-arguing instead for open discussion of controversial doctrines. They believed Calvin's self-appointed leadership undermined the bedrock principle of the Reformation that the faithful be allowed to challenge religious authorities. This book
shows that the challenge posed by these groups shaped the way the Calvinists themselves developed their reform strategies. Bruening's work demonstrates that the breadth and strength of the anti-Calvinist networks requires us to abandon the traditional assumption that Huguenots and other francophone
Protestants were universally Calvinist.