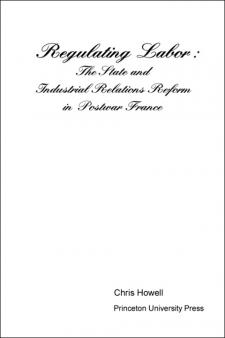 In May and June of 1968 a dramatic wave of strikes paralyzed France, making industrial relations reform a key item on the government agenda. French trade unions seemed due for a golden age of growth and importance. Today, however, trade unions are weaker in France than in any other advanced capitalist country. How did such exceptional militancy give way to equally remarkable quiescence? To answer this question, Chris Howell examines the reform projects of successive French governments toward trade unions and industrial relations during the postwar era, focusing in particular on the efforts of post-1968 conservative and socialist governments. Howell explains the genesis and fate of these reform efforts by analyzing constraints imposed on the French state by changing economic circumstances and by the organizational weakness of labor. His approach, which links economic, political, and institutional analysis, is broadly that of Regulation Theory. His explicitly comparative goal is to develop a framework for understanding the challenges facing labor movements throughout the advanced capitalist world in light of the exhaustion of the postwar pattern of economic growth, the weakening of the nation-state as an economic actor, and accelerating economic integration, particularly in Europe.