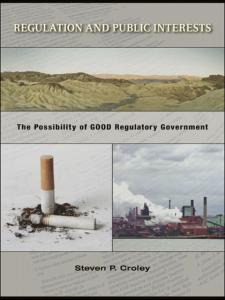 Not since the 1960s have U.S. politicians, Republican or Democrat, campaigned on platforms defending big government, much less the use of regulation to help solve social ills. And since the late 1970s, "deregulation" has become perhaps the most ubiquitous political catchword of all. This book takes on the critics of government regulation. Providing the first major alternative to conventional arguments grounded in public choice theory, it demonstrates that regulatory government can, and on important occasions does, advance general interests. Unlike previous accounts, Regulation and Public Interests takes agencies' decision-making rules rather than legislative incentives as a central determinant of regulatory outcomes. Drawing from both political science and law, Steven Croley argues that such rules, together with agencies' larger decision-making environments, enhance agency autonomy. Agency personnel inclined to undertake regulatory initiatives that generate large but diffuse benefits (while imposing smaller but more concentrated costs) can use decision-making rules to develop socially beneficial regulations even over the objections of Congress and influential interest groups. This book thus provides a qualified defense of regulatory government. Its illustrative case studies include the development of tobacco rulemaking by the Food and Drug Administration, ozone and particulate matter rules by the Environmental Protection Agency, the Forest Service's "roadless" policy for national forests, and regulatory initiatives by the Securities and Exchange Commission and the Federal Trade Commission.