Regulation of Subsidies and State Aids in WTO and EC Law 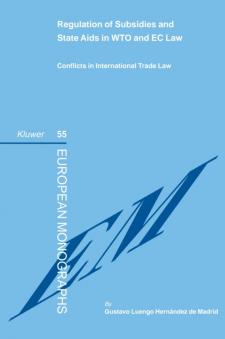 Regulating subsidies in international trade is crucial to the efficient and equitable allocation of resources and ultimately to global welfare. Much of the serious instability that persists in today's interdependent world may be traced to government interventions that dilute or defy such regulation.
In this in-depth analysis of subsidies and State aids, Gustavo Luengo details the regulatory elements that reveal how governments undertake the granting of support to their national industries. Although in theory such support is aimed at two overriding economic objectives - the elimination of harmful distortions, and the correction of market failures - he shows that in practice it is political contexts that determine the principles and objectives of the regulation of subsidies.

The analysis focuses on two mature regulatory systems, those of the World Trade Organization (WTO) and the European Communities (EC). The author describes both legal frameworks, and then proceeds to examine the differences and conflicts between the two systems, along with their reasons, consequences, and possible solutions. Significant aspects of the regulation of subsidies that emerge from the analysis include the following: