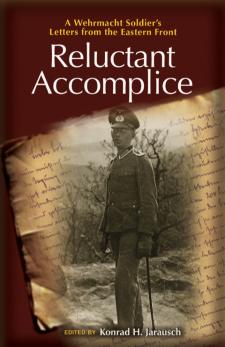 Reluctant Accomplice is a volume of the wartime letters of Dr. Konrad Jarausch, a German high-school teacher of religion and history who served in a reserve battalion of Hitler's army in Poland and Russia, where he died of typhoid in 1942. He wrote most of these letters to his wife, Elisabeth. His son, acclaimed German historian Konrad H. Jarausch, brings them together here to tell the gripping story of a patriotic soldier of the Third Reich who, through witnessing its atrocities in the East, begins to doubt the war's moral legitimacy. These letters grow increasingly critical, and their vivid descriptions of the mass deaths of Russian POWs are chilling. They reveal the inner conflicts of ordinary Germans who became reluctant accomplices in Hitler's merciless war of annihilation, yet sometimes managed to discover a shared humanity with its suffering victims, a bond that could transcend race, nationalism, and the enmity of war. Reluctant Accomplice is also the powerful story of the son, who for decades refused to come to grips with these letters because he abhorred his father's nationalist politics. Only now, late in his life, is he able to cope with their contents--and he is by no means alone. This book provides rare insight into the so-called children of the war, an entire generation of postwar Germans who grew up resenting their past, but who today must finally face the painful legacy of their parents' complicity in National Socialism.