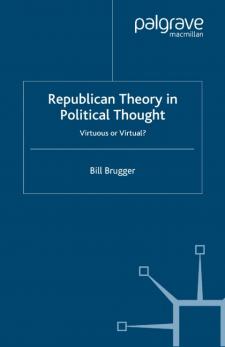 The book provides a thematic examination of republican theory from the Italian Renaissance, through seventeenth- and early-eighteenth-century England, the late- eighteenth-century Enlightenment and the experiences of the early American republic to contemporary debates. It maps out a republican ideal type according to four themes - popular sovereignty, a view of history which is sensitive to systemic corruption, an insistence on civic virtue and, following Philip Pettit, a conception of liberty as non-domination. It evaluates the attractiveness of those themes to liberals, communitarians, socialists, environmentalists and feminists and examines their relevance to inhabitants of the non-Western world. The book contributes to several topical debates dealing with the distinctiveness of a specifically republican tradition, the eclipse of virtue-centred thinking in the eighteenth century, the reassessment of the United States revolutionary tradition, the merits of liberalism versus communitarianism and the waves of democracy which are currently celebrated and criticized worldwide.