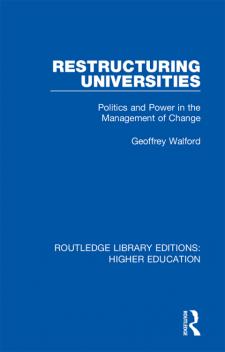 Originally published in 1987 Restructuring Universities uses Aston University as a case study of the internal restructuring taking place in universities. Aston lost one third of its funding in 1981 and was told to reduce its student numbers by one fifth within three years. The university has a balanced financial budget, well oversubscribed courses, and the average A level scores of entrants are over the national average in all subjects taught. The books looks at the ways in which the university dealt with rapid change, looking particularly at the decision making processes within the university and the ways in which internal power and politics influenced decisions made. Previous models of decision making are discussed and a new political model outlined. The book provides a useful and informed analysis of the context, politics and management of change in the university system.