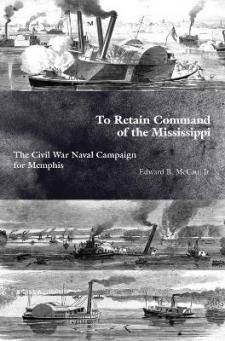 To Retain Command of the Mississippi

The Mississippi River was a strategic priority for the Union army from the outset of the American Civil War. By controlling the Mississippi, the North's military forces could effectively split the Confederacy in two and create economic and logistical havoc for Confederate supply lines that relied on river transportation. A number of battles were fought for control of the Mississippi, and ultimately the combination of Union troops supported by Federal gunboats and armored paddle steamers culminated in the surrender of Port Hudson in July 1863 and Union dominance over the Mississippi waterways.

McCaul brings this pivotal river battle back into the American Civil War discussion by highlighting the Union gains and Confederate losses that led up to the Battle of Memphis and maintaining that had the battle gone differently, Grant's plans for taking Vicksburg would have been drastically altered.