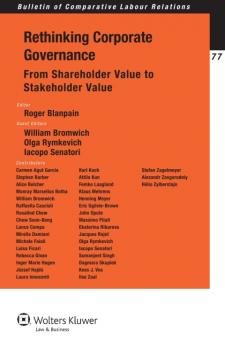 Now that the economic orthodoxy of ‘light-touch’ regulation has been widely discredited by recent events in the financial markets, and shareholder-oriented management has come under intense scrutiny, it is time to seriously consider the merits of stakeholder-oriented economies.

In this far-reaching symposium on this aspect of comparative labour relations, 35 scholars examine case studies and evolving scenarios in a wide variety of countries, from leading economic powers such as the United States, the United Kingdom, and Germany to post-socialist states such as Poland, Hungary, and Bulgaria to the formidable global economic presences of Brazil, Russia, and India. With contributions from leading experts from all around the world in the fields of labour law, industrial relations, labour economics, labour statistics, human resources management, organization theory and other related subjects, the papers focus on the impact of the global economic crisis and its implications for the future of employment. Specific contexts covered include: ;

adversarial versus strategic collective bargaining;
transnational collective bargaining;
long-term employees as the most valuable corporate stakeholders;
workers’ voice and participation in the restructuring of undertakings;
privatization of state-owned companies;
executive pay;
investment in vocational training in times of economic crisis;
the impact of the EU’s Cross-Border Merger Directive;
inherent dangers in the EMU one-size-fits-all monetary policy; and
cases of large-scale corporate fraud.
Of particular interest is the treatment of important developments in Singapore and Nigeria, as well as lessons to be learned from pitfalls encountered in South Africa and other countries. With its theoretical arguments and empirical data, this volume is certainly a major contribution to the debate over whether shareholder or stakeholder approaches to management yield the best results in terms of employment outcomes. As the world economic crisis continues to take its toll on employment, pension funds, public services, and living standards, the book is sure to find a wide audience among policymakers and lawyers worldwide concerned with the future of employment relations and their effect on both productivity and social stability. This volume includes a selection of papers from the Eighth International Conference in commemoration of Marco Biagi held at the Marco Biagi Foundation in Modena, Italy in March 2010.