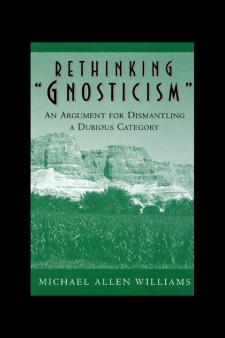 Most anyone interested in such topics as creation mythology, Jungian theory, or the idea of &quote;secret teachings&quote; in ancient Judaism and Christianity has found &quote;gnosticism&quote; compelling. Yet the term &quote;gnosticism,&quote; which often connotes a single rebellious movement against the prevailing religions of late antiquity, gives the false impression of a monolithic religious phenomenon. Here Michael Williams challenges the validity of the widely invoked category of ancient &quote;gnosticism&quote; and the ways it has been described. Presenting such famous writings and movements as the Apocryphon of John and Valentinian Christianity, Williams uncovers the similarities and differences among some major traditions widely categorized as gnostic. He provides an eloquent, systematic argument for a more accurate way to discuss these interpretive approaches. The modern construct &quote;gnosticism&quote; is not justified by any ancient self-definition, and many of the most commonly cited religious features that supposedly define gnosticism phenomenologically turn out to be questionable. Exploring the sample sets of &quote;gnostic&quote; teachings, Williams refutes generalizations concerning asceticism and libertinism, attitudes toward the body and the created world, and alleged features of protest, parasitism, and elitism. He sketches a fresh model for understanding ancient innovations on more &quote;mainstream&quote; Judaism and Christianity, a model that is informed by modern research on dynamics in new religious movements and is freed from the false stereotypes from which the category &quote;gnosticism&quote; has been constructed.