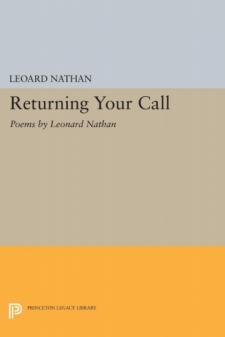 &quote;Every poet has one or two compulsive themes,&quote; writes Leonard Nathan. &quote;One of mine is how to make things fit together that don't but should; the other is getting down far enough below a surface to see if something is still worth praising. Over the years and without self-consciously trying. I have moved closer and closer to the human voice in my verse. But I have also tried to keep a quality in it-for lack of a better word, I call it eloquence-that makes it more than conversation. My hope is to be clear, true, and good listening.&quote;Originally published in 1975.The Princeton Legacy Library uses the latest print-on-demand technology to again make available previously out-of-print books from the distinguished backlist of Princeton University Press. These editions preserve the original texts of these important books while presenting them in durable paperback and hardcover editions. The goal of the Princeton Legacy Library is to vastly increase access to the rich scholarly heritage found in the thousands of books published by Princeton University Press since its founding in 1905.