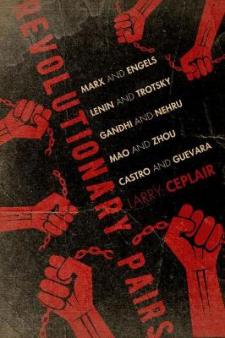 When examining history, one must be careful not to blame rapid political change solely on famine, war, economic inequality, or structural disfunctions alone. These conditions may linger for decades without social upheaval. Successful revolution requires two triggering elements: a crisis or conjuncture and revolutionary actors who are organized in a dedicated revolutionary party, armed with a radical ideology, and poised to act. While previous revolutions were ignited by small collectives, many in the twentieth century relied on strategic relationships between two exceptional leaders: Marx and Engels (Communism), Lenin and Trotsky (Russia), Ghandi and Nehru (India), Mao and Zhou (China), and Castro and Guevara (Cuba). These partnerships changed the world. In Revolutionary Pairs: Marx and Engels, Lenin and Trotsky, Gandhi and Nehru, Mao and Zhou, Castro and Guevara, Larry Ceplair tells the stories of five revolutionary struggles through the lens of famous duos. While each relationship was unique -- Castro and Guevara bonded like brothers, Mao and Zhou like enemies -- in every case, these leaders seized the opportunity for revolution and recognized they could not succeed without the other. The first cross-cultural exploration of revolutionary pairs, this book reveals the undeniable role of personality in modern political change.