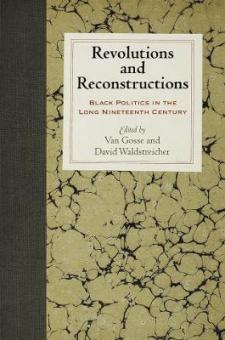 Revolutions and Reconstructions gathers historians of the early republic, the Civil War era, and African American and political history to consider not whether black people participated in the politics of the nineteenth century but how, when, and with what lasting effects. Collectively, its authors insist that historians go beyond questioning how revolutionary the American Revolution was, or whether Reconstruction failed, and focus, instead, on how political change initiated by African Americans and their allies constituted the rule in nineteenth-century American politics, not occasional and cataclysmic exceptions.

The essays in this groundbreaking collection cover the full range of political activity by black northerners after the Revolution, from cultural politics to widespread voting, within a political system shaped by the rising power of slaveholders. Conceptualizing a new black politics, contributors observe, requires reorienting American politics away from black/white and North/South polarities and toward a new focus on migration and local or state structures. Other essays focus on the middle decades of the nineteenth century and demonstrate that free black politics, not merely the politics of slavery, was a disruptive and consequential force in American political development.

From the perspective of the contributors to this volume, formal black politics did not begin in 1865, or with agitation by abolitionists like Frederick Douglass in the 1840s, but rather in the Revolutionary era's antislavery and citizenship activism. As these essays show, revolution, emancipation, and Reconstruction are not separate eras in U.S. history, but rather linked and ongoing processes that began in the 1770s and continued through the nineteenth century.