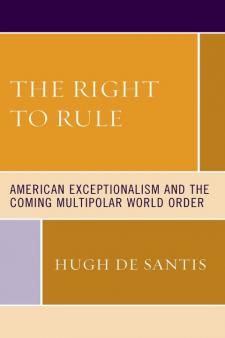 In The Right to Rule: American Exceptionalism and the Coming Multipolar World Order, Hugh De Santis explores the evolution of American exceptionalism and its effect on the nation's relations with the external world. De Santis argues that the self-image of an exceptional, providentially blessed society unlike any other is a myth that pays too little heed to the history that shaped America's emergence, including its core beliefs and values, which are inheritances from seventeenth-century England. From the republic's founding to its rise as the world's preeminent power, American exceptionalism has underpinned the nation's foreign policy, but it has become an anachronism in the twenty-first century. De Santis argues that, in the emerging multipolar world order, the United States will be one of several powers that determine the structure and rules of international politics, rather than the sole arbiter.