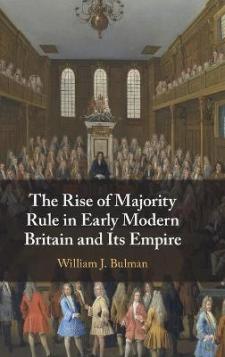 This expansive history of the origins of majority rule in modern representative government charts the emergence of majority voting as a global standard for decision-making in popular assemblies. Majority votes had, of course, been held prior to 1642, but not since antiquity had they been held with any frequency by a popular assembly with responsibility for the fate of a nation. The crucial moment in the global triumph of majority rule was its embrace by the elected assemblies of early modern Britain and its empire. William J. Bulman analyzes its sudden appearance in the English House of Commons and its adoption by the elected assemblies of Britain's Atlantic colonies in the age of the English, Glorious, and American Revolutions. These events made it overwhelmingly likely that the United Kingdom, the United States, and their former dependencies would become and remain fundamentally majoritarian polities. Providing an insightful commentary on the state of democratic governance today, this study sheds light on the nature, promise, and perils of majority rule.