The Rise of Political Action Committees 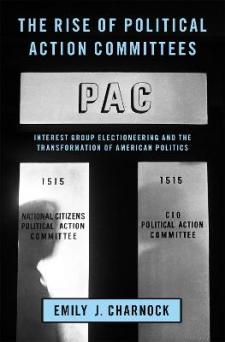 Political Action Committees (PACs) are a prominent and contentious feature of modern American election campaigns. As organizations that channel money toward political candidates and causes, their influence in recent decades has been widely noted and often decried. Yet, there has been no comprehensive history compiled of their origins, development, and impact over time.

In The Rise of Political Action Committees, Emily J. Charnock addresses this gap, telling a story with much deeper roots than contemporary commentators might expect. Documenting the first wave of PAC formation from the early 1940s to the mid-1960s, when major interest groups began creating them, she shows how PACs were envisaged from the outset as much more than a means of winning elections, but as tools for effecting ideological change in the two main parties. In doing so, Charnock
not only locates the rise of PACs within the larger story of interest group electioneering - which went from something rare and controversial at the beginning of the 20th Century to ubiquitous today - but also within the narrative of political polarization. Throughout, she offers a full picture of PACs as far
more than financial vehicles, showing how they were electoral innovators who pioneered strategies and tactics that came to pervade modern US campaigns and reshape American politics.

A broad-ranging political history of an understudied American campaign phenomenon, this book contextualizes the power and purpose of PACs, while revealing their transformative role within the American party system - helping to foster the partisan polarization we see today.