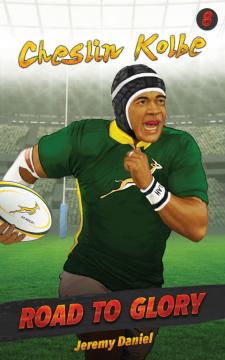 Cheslin roared with happiness as the final whistle blew in Yokohama. They were champions! Later, as his captain lifted the 2019 Rugby World Cup trophy into the air, he felt prouder than he’d ever been before — of himself, his team and his country.

Cheslin Kolbe tells the story of a kid from Kraaifontein, Cape Town, whose talent took him to international sports stardom, first to Toulouse, France, and eventually to the call-up that would change his life forever: to play for the Springbok 2019 World Cup squad. It’s the heartwarming story of a small player with a big heart whose signature sidestep helped the Springboks win the World Cup trophy for South Africa.

Cheslin Kolbe is part of the “Road to Glory” series, which covers some of South Africa’s sporting legends as they set out on their journeys to becoming national and international stars.