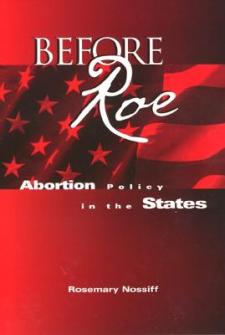 Few issues in contemporary U.S> politics have remained on the public agenda so long and so divisively as abortion policy. The landmark Supreme Court decision of Roe v. Waade, which held that laws prohibiting first trimester abortions were illegal because they violated a woman's right to privacy, still generates heated controversy today, a quarter of a century after it was made. The seeds of that controversy were sown in the seven years immediately preceding Roe, when state legislatures tried to reconcile religious opposition to abortion and individuals' civil liberties. In this groundbreaking book, Rosemary Nossiff examines the force that shaped abortion policy during those years, and the ways in which states responded to them. To provide in-depth analysis while still looking broadly at the picture, she studies New York, which passed the most permissive abortion bill in the country, and Pennsylvania, which passed one of the most restrictive. That these two states, which share similar demographic, political, and economic characteristics, should reach two such different outcomes provides a perfect case study for observing political dynamics at the state level. Nossiff examines the medical, religious, and legal discourses employed on both sides of the debate, as well as the role played by feminist discourse. She looks at the role of the political parties in the campaigns, as well as such interest groups as the National Council of Catholic Bishops, the Clergy Consultation Service, the National Organization for Women, and the National Association for the Repeal of Abortion Laws. In addition, she analyzes the strategies used by both sides, as well as partisan and institutionalized developments that facilitated success or failure. Finally, in the Epilogue, she assesses the Roe decision and its aftermath, including an analysis of the pro-life movement in Pennsylvania.As the author remarks, \u0022Without question people's positions on abortion are shaped by a myriad of social, moral, and economic factors. But ultimately abortion policy is shaped in the political arena. This book examines how one of the most intimate decisions a woman makes, whether to continue or terminate a pregnancy, has become one of the most politicized issues in contemporary American politics.