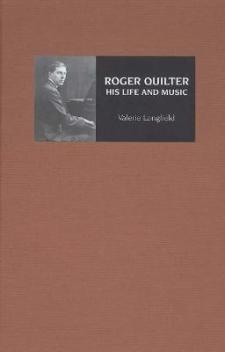 The songs of Roger Quilter are a staple of the English art song repertoire, yet little is known of his life, and his popularity suffered an eclipse in postwar years largely through changing musical fashions. Championed by the great English tenor Gervase Elwes, Quilter became famous for songs such as 'Now Sleeps the Crimson Petal', 'Love's Philosophy' and 'Go, Lovely Rose'. The BBC included A Children's Overture in their first broadcast concert, andthe success of his atmospheric music for the children's fairy play Where the Rainbow Ends ensured his immense popularity. Access to numerous sources worldwide, many of them unpublished, and extensive interviews with friends and family, have enabled Valerie Langfield to write a sympathetic and authoritative account of Quilter, the first full-length study. The first part focuses on Quilter's life: she examines his relationships with his friends, particularly Grainger and the de Glehn family, and how his wealth, ill-health, family and homosexuality affected him. Her researches testify to Quilter's quiet philanthropy: his many practical actions included his founder-membershipof the Musicians Benevolent Fund, generous and discreet assistance to young musicians, and help to Jewish friends fleeing Germany and Austria before the second world war. The second part of the book discusses and contextualises all his music: songs, chamber, orchestral and theatre music, and his light opera, Julia, performed at Covent Garden in 1936. The CD - which can be ordered separately bypurchasers of the book - contains recordings of Quilter himself, either playing or conducting. The 17 songs that Quilter recorded in 1934 with the baritone Mark Raphael are included, together with his own arrangement for piano quintet of the song cycle To Julia with Hubert Eisdell as the tenor soloist. Quilter also conducts a short selection of items of music from Where the Rainbow Ends. Also: Schedule of performances; Catalogue of works; Discography; Bibli