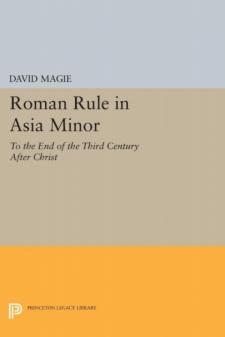 What is known of the expansion of the Roman Empire in Asia and adjacent lands to the East between 133 B.C. and A.D. 285 is presented here in a comprehensive organization of all the existing scholarship. An authority in the field of ancient history and archaeology, Mr. Magie presents a thorough account of political and economic conditions in this period. Volume 1 contains the text. Originally published in 1950. The Princeton Legacy Library uses the latest print-on-demand technology to again make available previously out-of-print books from the distinguished backlist of Princeton University Press. These editions preserve the original texts of these important books while presenting them in durable paperback and hardcover editions. The goal of the Princeton Legacy Library is to vastly increase access to the rich scholarly heritage found in the thousands of books published by Princeton University Press since its founding in 1905.