Rugby Football During the Nineteenth Century 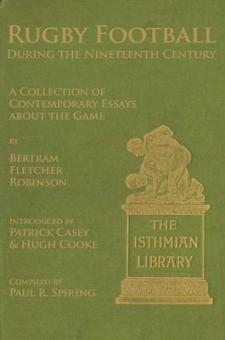 Rugby Football was the first volume in the successful nine-part series on Sports and Pastimes that was written for the Isthmian Library between 1896 and 1901. It was also one of the first rugby books to be written after members of the Rugby Football Union became bitterly divided over a proposal to pay match expenses to players. During 1896, the R.F.U. split and two new rugby codes were born; the strictly amateur code of Rugby Union and the more professionally inclined code of Rugby League. Bertram Fletcher Robinson was a supporter of amateurism in sport and he felt that the time was ripe to chart the birth of Rugby Union as a distinct branch of Rugby Football. During the 1890s, The Times newspaper described Fletcher Robinson as a household name within rugby circles . Robinson played as a Forward alongside many international players for both the Cambridge University Rugby Football Club 1st XV and the Combined Oxford & Cambridge University Rugby Football Club XV. According to his obituary in the Daily Express newspaper, he would have been capped for England but for an accident. Hence he was well qualified to write an anecdotal account of the origin of Rugby Union.
Rugby Football details the laws, training techniques and tactics that were specific to Rugby Union during its nascent period. It also reviews the development of Rugby Union in British educational institutions and as a global international sport. Rugby Football includes contributions from several other historical rugby figures: Frank Mitchell (Cambridge University & England), Richard Henry Burdon Cattell (Oxford University, Blackheath, Moseley, Barbarians, Midland Counties & England), Charles James Nicol Fleming (Oxford University & Scotland), Gregor MacGregor (Cambridge University, Barbarians & Scotland) and Henry Barrington Tristram (Oxford University & England).