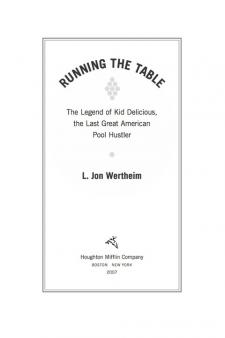 For fansofBringing Down the HouseandPositively FifthaSports Illustratedwriter shares the story of a heavyset, bipolar, and charming pool hustler. In most sports the pinnacle is Wheaties-box notoriety. But in the world of pool, notoriety is the last thing a hustler desires. Such is the dilemma that faces one Danny Basavich, an affable, generously proportioned Jewish kid from Jersey, who flounders through high school until he discovers the one thing he excels atthe feltand hits the road.Running the Tablespins the outrageous tale of Kid Delicious and his studlyif less talentedset-up man, Bristol Bob. Never was there a more entertaining or mismatched pair of sidekicks, as together they go underground into the flavorfully seamy world of pool to learn the art of the hustle and experience the highs and lows of life on the road. Their four-year odyssey takes them from Podunk pool halls to slick urban billiard rooms across America, as they manage one night to take down as much as $30,000, only to lose so much the next night that they lack gas money to get home. With every stop, the action gets hotter, the calls get closer, and Delicious's prowess with a cue stick becomes known more and more widely. Ultimately, Delicious sheds his cover once and for all and becomes professional pool's biggest sensation since Minnesota Fats.';A tremendously satisfying road story. What makesRunning the Tableso special is not the pool prowess of its protagonist but the unlikely bond between two wildly different young men who find each other through an exhilarating, often infuriating game.'Los Angeles Times