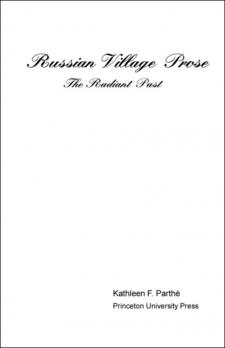 Kathleen Parth offers the first comprehensive examination of the controversial literary movement Russian Village Prose. From the 1950s to the decline of the movement in the 1970s, Valentin Rasputin, Fedor Abramov, and other writers drew on &quote;luminous&quote; memories of their rural childhoods to evoke a thousand-year-old pattern of life that was disappearing as they wrote. In their lyrical descriptions of a vanishing world, they expressed nostalgia for Russia's past and fears for the nation's future; they opposed collectivized agriculture, and fought to preserve traditional art and architecture and to protect the environment. Assessing the place of Village Prose in the newly revised canon of twentieth-century Russian literature, Parth maintains that these writers consciously ignored and undermined Socialist Realism, and created the most aesthetically coherent and ideologically important body of published writings to appear in the Soviet Union between Stalin's death and Gorbachev's ascendancy. In the 1970s, Village Prose was seen as moderately nationalist and conservative in spirit. After 1985, however, statements by several of its practitioners caused the movement to be reread as a possible stimulus for chauvinistic, anti-Semitic groups like Pamyat. This important development is treated here with a thorough discussion of all the political implications of these rural narratives. Nevertheless, the center of Parth's work remains her exploration of the parameters that constitute a &quote;code of reading&quote; for works of Village Prose. The appendixes contain a translation and analysis of a particularly fine example of Russian Village Prose--Aleksei Leonov's &quote;Kondyr.&quote;