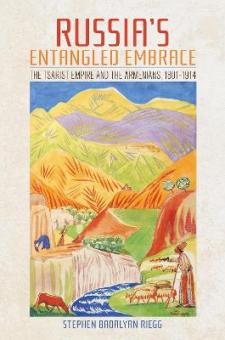 Russia's Entangled Embrace traces the relationship between the Romanov state and the Armenian diaspora that populated Russia's territorial fringes and navigated the tsarist empire's metropolitan centers.

By engaging the ongoing debates about imperial structures that were simultaneously symbiotic and hierarchically ordered, Stephen Badalyan Riegg helps us to understand how, for Armenians and some other subjects, imperial rule represented not hypothetical, clear-cut alternatives but simultaneous, messy realities. He examines why, and how, Russian architects of empire imagined Armenians as being politically desirable. These circumstances included the familiarity of their faith, perceived degree of social, political, or cultural integration, and their actual or potential contributions to the state's varied priorities.

Based on extensive research in the archives of St. Petersburg, Moscow, and Yerevan, Russia's Entangled Embrace reveals that the Russian government relied on Armenians to build its empire in the Caucasus and beyond. Analyzing the complexities of this imperial relationship-beyond the reductive question of whether Russia was a friend or foe to Armenians-allows us to study the methods of tsarist imperialism in the context of diasporic distribution, interimperial conflict and alliance, nationalism, and religious and economic identity.