Salt Systems of the Earth 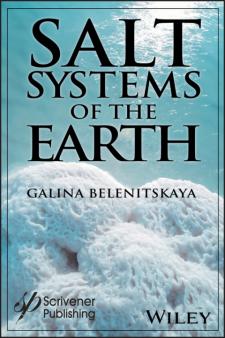 Like water, salt is one of the most commonplace items in our everyday lives.  From the omnipresent shaker that you see on every table in every restaurant, to the ocean water we swim in, salt is something that we rarely think about.  But there is much more to the story of salt than most people think.  Not only is salt a natural resource that must be captured and refined for public consumption, but “salt domes,” large deposits of salt that form under the ground, are important for finding and drilling for petroleum and natural gas. Salt is so important that, in ancient times, it was sometimes used as a currency in various cultures around the world, and it has been used as a food preservative, long before refrigeration was invented.  Salt is something we rarely think about, but it is one of the most important natural resources that exists. This is the first integrated study of salt’s global development in the Earth’s subsurface, its tectonic history and kinematic evolution, “live” salt-naphtide interconnections, and their geological recycling. The Earth’s salt is shown as a peculiar umbilical thread in the analysis of numerous geological processes of salt formation, transformation, migration, discharge and regeneration, and their association with hydrocarbons.  Presented here is the science of salt, including the active salt bodies’ “live” in Earth’s subsurface, their fate and influence over the other geological processes, including grandiose systems of kinetically interrelated allochthonous nappe-like and sub-vertical bodies formed by the migrating salt.  Also included are a description of sub-conformable sheet-like salt bodies formed not by the evaporation but by emigration of buried brine-salt masses and their discharge at new, younger stratigraphic levels, a description of a phenomenon of the “halo-volcanism” due to depth breakthroughs and explosive discharges of the hydrocarbon-brine-salt masses, an examination of the over-diapir surface and brine lakes with fluctuating levels, and many other things. The book provides new interpretations of numerous issues reflecting the salt “life” manifestations and gives a key to a broad circle of the geological enigmas, from global events like the Messinian crisis in the Mediterranean to Biblical legends and enigmas of the Dead Sea-lake. Whether you are a scientist or student working in the natural or Earth sciences, a geologist, an anthropologist, a petroleum engineer, a petrophysicist, or any other engineer or student working in petroleum engineering, this groundbreaking work is a must-have.  Perfect for any scientist or engineer’s library, this volume can be a must-read page-turner or a valuable reference work.