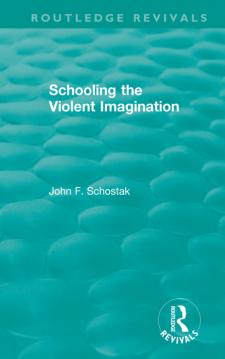 The violent imagination begins in experiences of violation against the self and grows through the stories, myths, folktales and anecdotes of everyday life. Originally published in 1986, John Schostak discusses the educational, social and moral implications of the violent imagination in connection with theories of violence, childrearing practices, and schooling as a childrearing institution. He also looks at the relation between sexism, racism, drugs and the emergence of a vandalised sense of self. The book explores the complex ways in which images of violence pervade society, inform action and provide interpretations of events. Schools, the author argues, contribute towards the development of a violent imagination which guides judgements and actions. The child’s images and experiences of violation may involve physical assault or psychological forms of assault. Some of these experiences of violation and violence are considered normal, even moral (‘spare the rod and spoil the child’); others are considered abnormal, criminal, pathological – although the abstract logical form of each may be equivalent. Nevertheless, all such images contribute towards the development of a sense of violation, and children are schooled to accept normal forms and reject abnormal forms.