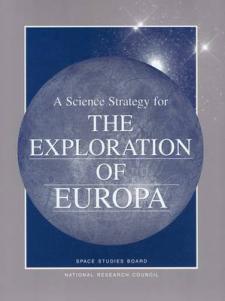 A Science Strategy for the Exploration of Europa

Since its discovery in 1610, Europa - one of Jupiter's four large moons - has been an object of interest to astronomers and planetary scientists. Much of this interest stems from observations made by NASA's Voyager and Galileo spacecraft and from Earth-based telescopes indicating that Europa's surface is quite young, with very little evidence of cratering, and made principally of water ice.

More recently, theoretical models of the jovian system and Europa have suggested that tidal heating may have resulted in the existence of liquid water, and perhaps an ocean, beneath Europa's surface. NASA's ongoing Galileo mission has profoundly expanded our understanding of Europa and the dynamics of the jovian system, and may allow us to constrain theoretical models of Europa's subsurface structure.

Meanwhile, since the time of the Voyagers, there has been a revolution in our understanding of the limits of life on Earth. Life has been detected thriving in environments previously thought to be untenable - around hydrothermal vent systems on the seafloor, deep underground in basaltic rocks, and within polar ice. Elsewhere in the solar system, including on Europa, environments thought to be compatible with life as we know it on Earth are now considered possible, or even probable. Spacecraft missions are being planned that may be capable of proving their existence.

Against this background, the Space Studies Board charged its Committee on Planetary and Lunar Exploration (COMPLEX) to perform a comprehensive study to assess current knowledge about Europa, outline a strategy for future spacecraft missions to Europa, and identify opportunities for complementary Earth-based studies of Europa. (See the preface for a full statement of the charge.)