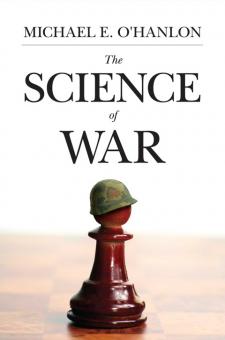 The Science of War

The U.S. military is one of the largest and most complex organizations in the world. How it spends its money, chooses tactics, and allocates its resources have enormous implications for national defense and the economy. The Science of War is the only comprehensive textbook on how to analyze and understand these and other essential problems in modern defense policy. Michael O'Hanlon provides undergraduate and graduate students with an accessible yet rigorous introduction to the subject. Drawing on a broad range of sources and his own considerable expertise as a defense analyst and teacher, he describes the analytic techniques the military uses in every crucial area of military science. O'Hanlon explains how the military budget works, how the military assesses and deploys new technology, develops strategy and fights wars, handles the logistics of stationing and moving troops and equipment around the world, and models and evaluates battlefield outcomes. His modeling techniques have been tested in Iraq and Afghanistan, including the methods he used to predict higher-than-anticipated troop fatalities in Iraq--controversial predictions that have since been vindicated. The Science of War is the definitive resource on warfare in the twenty-first century. Gives the best introduction to defense analysis available Covers defense budgeting Shows how to model and predict outcomes in war Explains military logistics, including overseas basing Examines key issues in military technology, including missile defense, space warfare, and nuclear-weapons testing Based on the author's graduate-level courses at Princeton, Columbia, and Georgetown universities