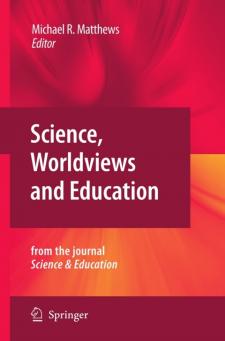 This book has its origins in a special issue of the journal Science & Education (Volume 18 Numbers 6–7, 2009). The essay by Costas Skordoulis – ‘Science and Worldviews in the Marxist Tradition’ – did not appear in that special issue due to a mistake in production scheduling. It was published in an earlier issue of the journal (Volume 17 Number 6, 2008), but has been included in this book version of the special issue. As explained in the Introduction, the catalyst for the journal special issue was the essay on ‘Science, Worldviews and Education’ submitted to the journal by Hugh G. Gauch Jr. This was circulated to the other contributors who were asked to write their own contribution in the light of the arguments and literature contained in the paper. Hugh made brief ‘Responses and Clari?cations’ after the papers were written. However the Tanis Edis article on Islam and my own article on Priestley were processed too late to bene?t from Hugh’s appraisal. The journal is associated with the International History, Philosophy, and Science Teaching Group which was formed in 1987. The group stages biennial international conferences and occasional regional conferences (details can be found at www. ihpst. org). The group, though the journal, conferences, and its electronic newsletter (at www. ihpst.