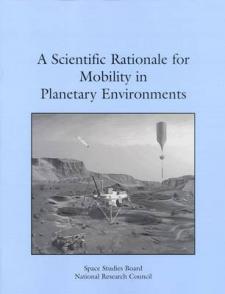 A Scientific Rationale for Mobility in Planetary Environments

For the last several decades, the Committee on Planetary and Lunar Exploration (COMPLEX) has advocated a systematic approach to exploration of the solar system; that is, the information and understanding resulting from one mission provide the scientific foundations that motivate subsequent, more elaborate investigations. COMPLEX's 1994 report, An Integrated Strategy for the Planetary Sciences: 1995-2010,1 advocated an approach to planetary studies emphasizing "hypothesizing and comprehending" rather than "cataloging and categorizing." More recently, NASA reports, including The Space Science Enterprise Strategic Plan2 and, in particular, Mission to the Solar System: Exploration and Discovery-A Mission and Technology Roadmap,3 have outlined comprehensive plans for planetary exploration during the next several decades. The missions outlined in these plans are both generally consistent with the priorities outlined in the Integrated Strategy and other NRC reports,4,5 and are replete with examples of devices embodying some degree of mobility in the form of rovers, robotic arms, and the like.

Because the change in focus of planetary studies called for in the Integrated Strategy appears to require an evolutionary change in the technical means by which solar system exploration missions are conducted, the Space Studies Board charged COMPLEX to review the science that can be uniquely addressed by mobility in planetary environments.