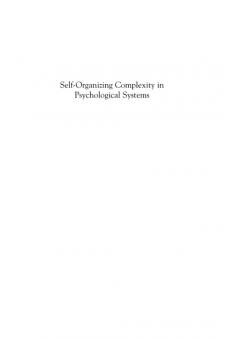 This volume addresses itself to the ways in which the so-called 'new sciences of complexity' can deepen and broaden neurobiological and psychological theories of mind. Complexity theory has gained increasing attention over the past 20 years across diverse areas of inquiry, including mathematics, physics, economics, biology, and the social sciences. Complexity theory concerns itself with how nonlinear dynamical systems evolve and change over time and draws on research arising from chaos theory, self-organization, artificial intelligence and cellular automata, to name a few. This emerging discipline shows many points of convergence with psychological theory and practice, emphasizing that history is irreversible and discontinuous, that small early interventions can have large and unexpected later effects, that each life trajectory is unique yet patterned, that measurement error is not random and cannot be justifiably distributed equally across experimental conditions, that a system's collective and coordinated organization is emergent and often arises from simple components in interaction, and that change is more likely to emerge under conditions of optimal turbulence.