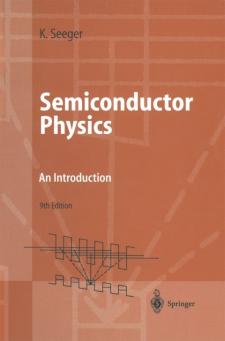 This book, now in its ninth edition, still has the character of a textbook with the emphasis on "Physics". The volume has increased somewhat because several improvements have been made and some new items have been included. In Sect. 13. 2 the new Quantum Cascade Laser which covers the far in­ frared spectral range has been added. In Sect. 14. 4 the theory of the quantum Hall effect is now based on ballistic transport which in a more general respect without referring to the then still unknown quantum Hall effect was consid­ ered already by Rudolf Peierls. In the same chapter, the recent discovery of a low-temperature resistance oscillation in a very pure semiconductor under the influence of combined dc and ac electric fields in addition to a magnetic field is presented. Furthermore, quantum Hall effect observations with an unprece­ dented high precision are remarkable and may give a new impetus to theory. A new Sect. 15. 5 presents information about coaxial carbon tubes of nanometer size diameter and how they are integrated as the current transporting element in a field effect transistor. In another new addition Sect. 15. 6 with the title Molecular Electronics, the current-voltage rectifying characteristics of an or­ ganic Langmuir-Blodgett film of nanometer thickness is shown. These efforts serve to demonstrate where the ever decreasing size of electronic circuits may come to its natural limits. The system of units preferred here is the SI system.