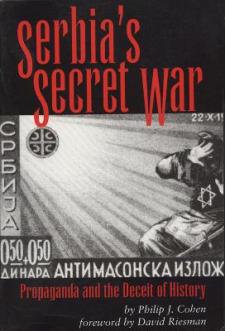 An entire piece of Serbian history is missing. And in the middle of the latest Yugoslav war-Europe's worst blood bath since World War II-Serbian politicians, propagandists, and revisionist historians have made a cynical attempt at replacing the missing piece by rewriting the Holocaust record: Serbs were not Nazi collaborators in genocide, but purely victims of the same atrocities that befell the Jews; and Serbian aspirations for a Greater Serbia are not driven by a murderous, nationalistic hatred, but rather are propelled by a victim's desire to lay claim to a safe homeland, a Serbian Promised Land. Thus has the current spilling of blood been justified.

Philip J. Cohen argues that the existence of such a propaganda campaign, emanating from Belgrade, began in the earliest days of the post-World War II era and, since then, has been reflected in the world media, as well as in popular commentary and scholarly analysis. More astonishing is that this campaign has been widely successful, particularly in Israel.

In attempting to not only establish but also explain the Serbian record during the Nazi occupation, Cohen takes his reader back into nineteenth-century Serbia to uncover the foundation of a political and social system that was partly built on ethnic prejudices and the glorification of violence. The rise of Serbian fascism in the 1930s was therefore inevitable-predetermined by the politics of power- and land-grabbing.

Remarkable for its broad portrayal and penetrating examination of the Yugoslav social and political experience, Serbia at War with History draws heavily on documents that have been previously unavailable to the West. Some of the written record has been translated and is published here, in full, for the first time. Destined to be regarded as an important contribution to the field, Cohen's careful study of the Serbian role in the Second World War will dramatically alter how scholars, policy makers, and the general public view the bloodshed in the former Yugoslavia-and how they will come to understand the reasons behind it.