In the Shadow of the Garrison State 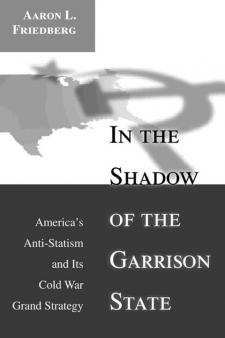 War--or the threat of war--usually strengthens states as governments tax, draft soldiers, exert control over industrial production, and dampen internal dissent in order to build military might. The United States, however, was founded on the suspicion of state power, a suspicion that continued to gird its institutional architecture and inform the sentiments of many of its politicians and citizens through the twentieth century. In this comprehensive rethinking of postwar political history, Aaron Friedberg convincingly argues that such anti-statist inclinations prevented Cold War anxieties from transforming the United States into the garrison state it might have become in their absence. Drawing on an array of primary and secondary sources, including newly available archival materials, Friedberg concludes that the "weakness" of the American state served as a profound source of national strength that allowed the United States to outperform and outlast its supremely centralized and statist rival: the Soviet Union. Friedberg's analysis of the U. S. government's approach to taxation, conscription, industrial planning, scientific research and development, and armaments manufacturing reveals that the American state did expand during the early Cold War period. But domestic constraints on its expansion--including those stemming from mean self-interest as well as those guided by a principled belief in the virtues of limiting federal power--protected economic vitality, technological superiority, and public support for Cold War activities. The strategic synthesis that emerged by the early 1960s was functional as well as stable, enabling the United States to deter, contain, and ultimately outlive the Soviet Union precisely because the American state did not limit unduly the political, personal, and economic freedom of its citizens. Political scientists, historians, and general readers interested in Cold War history will value this thoroughly researched volume. Friedberg's insightful scholarship will also inspire future policy by contributing to our understanding of how liberal democracy's inherent qualities nurture its survival and spread.