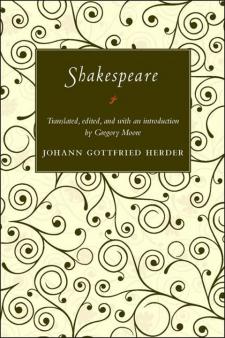 Without Johann Gottfried Herder (1744-1803), we simply would not understand Shakespeare in the way we do. In fact, much literature and art besides Shakespeare would neither look the same nor be the same without the influence of Herder's &quote;Shakespeare&quote; (1773). One of the most important and original works in the history of literary criticism, this passionate essay pioneered a new, historicist approach to cultural artifacts by arguing that they should be judged not by their conformity to a set of conventions imported from another time and place, but by the effectiveness of their response to their own historical and cultural context. Rejecting the authority of a dominant and stifling French neoclassicism that judged eighteenth-century plays by the criteria of Aristotle, Herder's &quote;Shakespeare&quote; signaled a break with the Enlightenment, the approach of Romanticism, and the arrival of a distinctly modern form of aesthetic appreciation. With a vivid new translation and a fascinating introduction by Gregory Moore, this edition of Herder's classic will speak to today's readers with undiminished power and persuasiveness.