Shakespeare and Sexuality in the Comedy of Morecambe & Wise 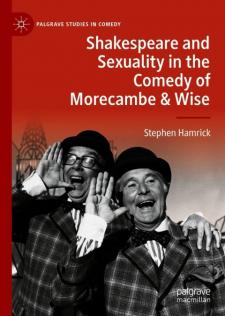 Contextualizing the duo’s work within British comedy, Shakespeare criticism, the history of sexuality, and their own historical moment, this book offers the first sustained analysis of the 20th Century’s most successful double-act.  Over the course of a forty-four-year career (1940-1984), Eric Morecambe & Ernie Wise appropriated snippets of verse, scenes, and other elements from seventeen of Shakespeare’s plays more than one-hundred-and-fifty times.  Fashioning a kinder, more inclusive world, they deployed a vast array of elements connected to Shakespeare, his life, and institutions. Rejecting claims that they offer only nostalgic escapism, Hamrick analyses their work within contemporary contexts, including their engagement with many forms and genres, including Variety, the heritage industry, journalism, and more.  ‘The Boys’ deploy Shakespeare to work through issues of class, sexuality, and violence.  Lesbianism, drag, gay marriage, and a queer aesthetics emerge, helping to normalize homosexuality and complicate masculinity in the ‘permissive’ 1960s.