She Could Be Chaplin! 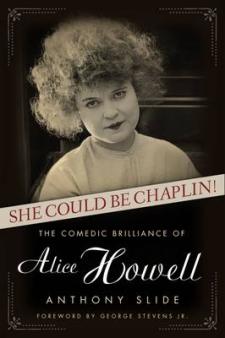 Alice Howell (1886-1961) is slowly gaining recognition and regard as arguably the most important slapstick comedienne of the silent era. This new study, the first book-length appreciation, identifies her place in the comedy hierarchy alongside the best-known of silent comediennes, Mabel Normand. Like Normand, Howell learned her craft with Mack Sennett and Charlie Chaplin. Beginning her screen career in 1914, Howell quickly developed a distinctive style and eccentric attire and mannerisms, successfully hiding her good looks, and was soon identified as the ""Female Charlie Chaplin.""

Howell became a star of comedy shorts in 1915 and continued her career through 1928 and the advent of sound in film. While she is today recognized as a pioneering female filmmaker, during her career she never expressed much interest in her work, seeing it only as a means to an end, with her income carefully invested in real estate. It has taken many years for her to gain her rightful place in film history, not only as a comedienne, but also as matriarch of a prominent American family that includes son-in-law and director George Stevens and grandson George Stevens Jr., founder of the American Film Institute and the Kennedy Center Honors, who provides a foreword.