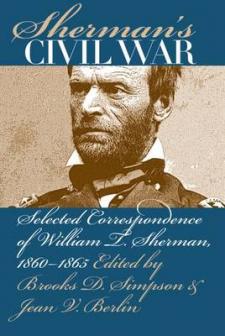 The first major modern edition of the wartime correspondence of General William T. Sherman, this volume features more than 400 letters written between the election of Abraham Lincoln in 1860 and the day Sherman bade farewell to his troops in 1865. Together, they trace Sherman's rise from obscurity to become one of the Union's most famous and effective warriors.
Arranged chronologically and grouped into chapters that correspond to significant phases in Sherman's life, the letters--many of which have never before been published--reveal Sherman's thoughts on politics, military operations, slavery and emancipation, the South, and daily life in the Union army, as well as his reactions to such important figures as General Ulysses S. Grant and President Lincoln.
Lively, frank, opinionated, discerning, and occasionally extremely wrong-headed, these letters mirror the colorful personality and complex mentality of the man who wrote them. They offer the reader an invaluable glimpse of the Civil War as Sherman saw it.