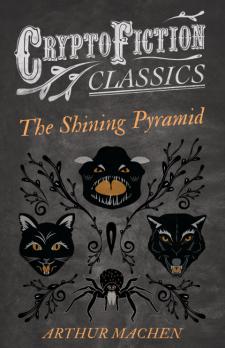 This early work by Arthur Machen was originally published in 1895 and we are now republishing it with a brand new introductory biography as part of our Cryptofiction Classics series. 'The Shining Pyramid' is a short story of a mysterious arrangement of stones found on a doorstep which lead to the discovery of underground dwellers best left untouched. Arthur Machen was born in Caerleon, Monmouthshire, Wales in 1863. At the age of eleven, he boarded at Hereford Cathedral School, where he received a comprehensive classical education. His first major success came in 1894, with the novella 'The Great God Pan'. Although widely denounced by the press as degenerate and horrific because of its decadent style and sexual content, it has since garnered a reputation as a classic of horror; indeed, author Stephen King has called it “maybe the best [horror story] in the English language.” His legacy remains formidable; his work has influenced countless other artists, and is seen as setting the stage for – amongst other things – the Cthulhu horrors of H. P. Lovecraft. The Cryptofiction Classics series contains a collection of wonderful stories from some of the greatest authors in the genre, including Ambrose Bierce, Arthur Conan Doyle, Robert Louis Stevenson, and Jack London. From its roots in cryptozoology, this genre features bizarre, fantastical, and often terrifying tales of mythical and legendary creatures. Whether it be giant spiders, werewolves, lake monsters, or dinosaurs, the Cryptofiction Classics series offers a fantastic introduction to the world of weird creatures in fiction.