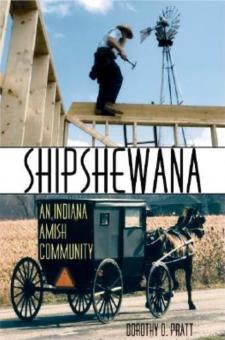 While most books about the Amish focus on the Pennsylvania settlements or on the religious history of the sect, this book is a cultural history of one Indiana Amish community and its success in resisting assimilation into the larger culture. Amish culture has persisted relatively unchanged primarily because the Amish view the world around them through the prism of their belief in collective salvation based on purity, separation, and perseverance. Would anything new add or detract from the community's long-term purpose? Seen through this prism, most innovation has been found wanting.

Founded in 1841, Shipshewana benefited from LaGrange County's relative isolation. As Dorothy O. Pratt shows, this isolation was key to the community's success. The Amish were able to develop a stable farming economy and a social structure based on their own terms. During the years of crisis, 1917–1945, the Amish worked out ways to protect their boundaries that would not conflict with their basic religious principles. As conscientious objectors, they bore the traumas of World War I, struggled against the Compulsory School Act of 1921, negotiated the labyrinth of New Deal bureaucracy, and labored in Alternative Service during World War II. The story Pratt tells of the postwar years is one of continuing difficulties with federal and state regulations and challenges to the conscientious objector status of the Amish. The necessity of presenting a united front to such intrusions led to the creation of the Amish Steering Committee. Still, Pratt notes that the committee's effect has been limited. Crisis and abuse from the outer world have tended only to confirm the desire of the Amish to remain a people apart, and lends a special poignancy to this engrossing tale of resistance to the modern world.