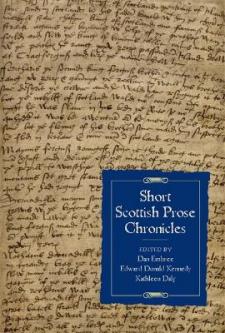 The seven chronicles edited here record Scottish history as it circulated in the late fifteenth century and the early sixteenth century in abbreviated and mostly vernacular texts, intended for a broader, less educated audience than was served by the great Latin chronicles of Fordun, Bower, Boece, and their successors. They reflect the greatly expanded literacy of the end of the Middle Ages, and the consequent necessity of educating a broader public in theoutlines of Scottish history and contemporary Scottish politics. They build their version of medieval events on Scotland's foundation myths and exhibit a distinct anti-English bias - indeed, the Scottis Originale began a type of Scottish anti-Arthurian tradition. They thus present an alternative and distinctly "Scottish" view of "history".
The chronicles are presented here with with comprehensive notes and glossaries. They are: La Vraie Cronicque d'Escoce, The Scottis Originale, The Chronicle of the Scots, The Ynglis Chronicle, Nomina Omnium Regum Scotorum, The Brevis Chronica, The St Andrews Chronicle.