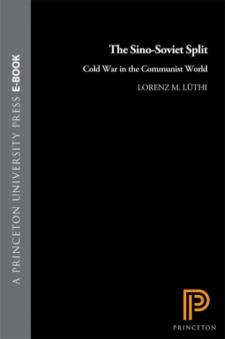 A decade after the Soviet Union and the People's Republic of China established their formidable alliance in 1950, escalating public disagreements between them broke the international communist movement apart. In The Sino-Soviet Split, Lorenz Luthi tells the story of this rupture, which became one of the defining events of the Cold War. Identifying the primary role of disputes over Marxist-Leninist ideology, Luthi traces their devastating impact in sowing conflict between the two nations in the areas of economic development, party relations, and foreign policy. The source of this estrangement was Mao Zedong's ideological radicalization at a time when Soviet leaders, mainly Nikita Khrushchev, became committed to more pragmatic domestic and foreign policies. Using a wide array of archival and documentary sources from three continents, Luthi presents a richly detailed account of Sino-Soviet political relations in the 1950s and 1960s. He explores how Sino-Soviet relations were linked to Chinese domestic politics and to Mao's struggles with internal political rivals. Furthermore, Luthi argues, the Sino-Soviet split had far-reaching consequences for the socialist camp and its connections to the nonaligned movement, the global Cold War, and the Vietnam War. The Sino-Soviet Split provides a meticulous and cogent analysis of a major political fallout between two global powers, opening new areas of research for anyone interested in the history of international relations in the socialist world.