Six French Poets of Our Time 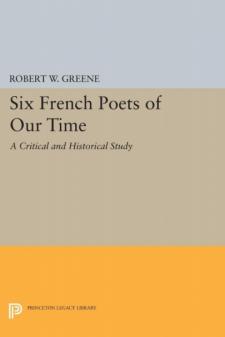 During the last sixty to seventy years avant-garde poetry in France has evolved in two directions: one toward poetry conceived as a means to an end, the other toward poetry as an end in itself. Focusing on Pierre Reverdy, Francis Ponge, René Char, André du Bouchet, Jacques Dupin, and Marcelin Pleynet as the modern French poets who most faithfully reflect these directions, Robert Greene's chronological study allows us to follow the two-pronged evolution of French poetry since 1910. Situating his argument in a detailed historical context and basing it on comparisons with artistic movements and the poets' own writings on art, and on extended analyses of selected representative poems, the author is able to establish a new intellectual-historical perspective on contemporary poetry. Professor Greene finds that whereas Reverdy, Char, du Bouchet, and Dupin all embrace a conception of poetry as quest, as a search for the absolute, as the Way of beauty or truth, Ponge and Pleynet hold to a view of poetry as jête, as a celebration of the relative, as the play and display of language in action. What knits them together, he concludes, is the way in which each poet sums up his era as a stage in the development of twentieth-century French poetry. Originally published in 1979. The Princeton Legacy Library uses the latest print-on-demand technology to again make available previously out-of-print books from the distinguished backlist of Princeton University Press. These editions preserve the original texts of these important books while presenting them in durable paperback and hardcover editions. The goal of the Princeton Legacy Library is to vastly increase access to the rich scholarly heritage found in the thousands of books published by Princeton University Press since its founding in 1905.