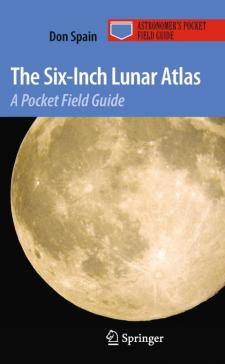 Here is a lunar atlas designed specifically for use in the field by lunar observers. Its title – The Six-inch Lunar Atlas – refers both to the aperture of the telescope used to make the images in the book, and also to the book’s physical size: so it’s perfect for fitting into an observer’s pocket! The author’s own lunar photographs were taken with a 6-inch (150mm) telescope and CCD camera, and closely match the visual appearance of the Moon when viewed through a modest (3-inch to 8-inch) telescope. (Depending on seeing, of course.) Each picture is shown oriented "as the Moon really is" when viewed from the northern hemisphere, and is supplemented by exquisite computer sketches that list the main features. Two separate computer sketches are provided to go with each photograph, one oriented to appear as seen through an SCT telescope (e.g. the Meade and Celestron ranges), the other oriented for Newtonian and refracting telescopes. It is worth commenting that most observers find it extremely difficult to identify lunar features when using a conventional atlas and SCT telescope – the human brain is very poor at making "mirror-image" visual translations. There is a page of descriptions for the salient features in each photograph. Finally, an index at the end of the book lists all the features identified, and gives their approximate height, depth and for crater, diameter.