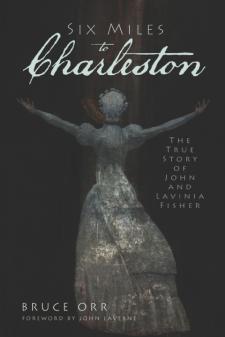 The shocking true story of America’s first female serial killer, half of a husband and wife team who terrorized Charleston, SC, in the early 19th century.   On February 18th, 1820, John and Lavinia Fisher were executed in front of some two thousand South Carolinians. To this day, legends of the husband-and-wife serial killers range from the fearsome to the fantastical—and many swear they have encountered Lavinia’s ghost haunting the Old Charleston Jail House. But in Six Miles to Charleston, local historian and former homicide investigator Bruce Orr uncovers their horrifying true story.   When a young man outwitted John and Lavinia in 1819, he escaped death and went straight to the authorities. Orr recounts the investigation from the initial police raid on the murderous couple’s Six Mile Inn—with its reportedly grisly cellar—to their capture, incarceration and dramatic last moments of life. But as Orr reveals, there still may be more sinister deeds left unpunished. An overzealous sheriff, corrupt officials and documents only recently discovered all suggest that there is more to the tale.