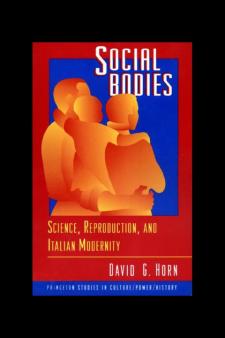 Using as his example post-World War I Italy and the government's interest in the size, growth rate, and "vitality" of its national population, David Horn suggests a genealogy for our present understanding of procreation as a site for technological intervention and political contestation. Social Bodies looks at how population and reproductive bodies came to be the objects of new sciences, technologies, and government policies during this period. It examines the linked scientific constructions of Italian society as a body threatened by the "disease" of infertility, and of women and men as social bodies--located neither in nature nor in the private sphere, but in that modern domain of knowledge and intervention carved out by statistics, sociology, social hygiene, and social work. Situated at the intersection of anthropology, cultural studies, and feminist studies of science, the book explores the interrelated factors that produced the practices of reason we call social science and social planning. David Horn draws on many sources to analyze the discourses and practices of "social experts," the resistance these encountered, and the often unintended effects of the new objectification of bodies and populations. He shows how science, while affirming that maternity was part of woman's "nature," also worked to remove reproduction from the domain of the natural, making it an object of technological intervention. This reconstitution of bodies through the sciences and technologies of the social, Horn argues, continues to have material consequences for women and men throughout the West.