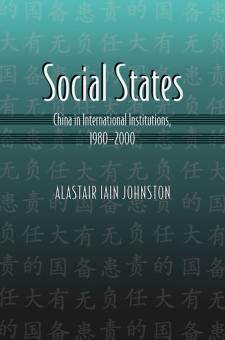 &quote;Constructive engagement&quote; became a catchphrase under the Clinton administration for America's reinvigorated efforts to pull China firmly into the international community as a responsible player, one that abides by widely accepted norms. Skeptics questioned the effectiveness of this policy and those that followed. But how is such socialization supposed to work in the first place? This has never been all that clear, whether practiced by the Association of South East Asian Nations (ASEAN), Japan, or the United States. Social States is the first book to systematically test the effects of socialization in international relations--to help explain why players on the world stage may be moved to cooperate when doing so is not in their material power interests. Alastair Iain Johnston carries out his groundbreaking theoretical task through a richly detailed look at China's participation in international security institutions during two crucial decades of the &quote;rise of China,&quote; from 1980 to 2000. Drawing on sociology and social psychology, this book examines three microprocesses of socialization--mimicking, social influence, and persuasion--as they have played out in the attitudes of Chinese diplomats active in the Conference on Disarmament, the Comprehensive Nuclear Test Ban, the Convention on Conventional Weapons, and the ASEAN Regional Forum. Among the key conclusions: Chinese officials in the post-Mao era adopted more cooperative and more self-constraining commitments to arms control and disarmament treaties, thanks to their increasing social interactions in international security institutions.